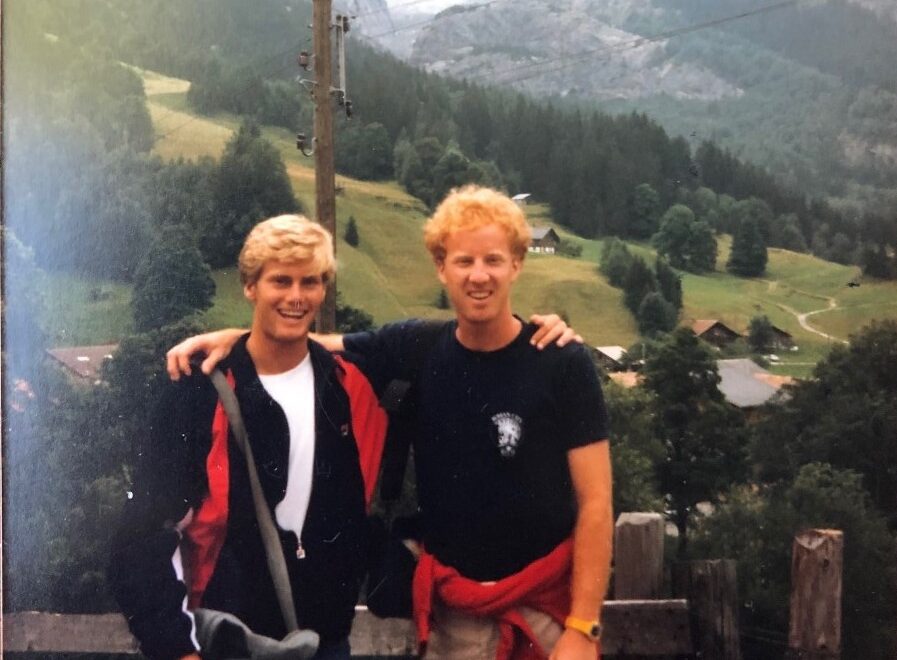 Shawn Gallagher was my oldest friend. We lost him on Monday when he died from complications of leukemia. He’d had some pains in his legs the preceding weeks and went to the doctor about a week ago. They immediately sent him to the hospital where he died only two days later.

It was too soon. He was only 59 and had always been healthy.

We met in 1978 when I was a freshman and he a sophomore in high school. He was a star distance runner and I was also pretty good, but nowhere near his level.

Shawn saved by my wimpy stomach

Early in our friendship we ran in the Southern California high school championship race. Shawn was having a terrible race, for him, but it became cataclysmic when I passed him with about 100 yards to go.

He was thinking, “Great, a bad race is now the worst ever. I’m going to lose to my smart-ass freshman friend who will never let me hear the end of it.” Shawn always described me as being an okay loser but a terrible winner; i.e., I rubbed it in. Only with those I love!

Anyway, shortly after I passed him fortune shone on him. How? He saw me start to vomit.

“Yes! There is a God!” he said to himself. Then, with no mercy, he blew past me as I puked my guts out. We dined out on that story for the better part of four decades.

We saw numerous movies together in those high school years. Oddly, the only one we remember clearly was called Players, which we both agreed, then and now, was the worst film ever made.

My gramma and “Sharon”

Shawn was the only friend who knew my grandmother, who passed away in 1981. She loved Shawn. Unfortunately, she always screwed his name up, calling him “Sharon.” We finally gave up correcting her.

End of story? No. Because all these years later Shawn came back from Europe to live for a year in Newport Beach where I reside. How did I torture him? I had my kids call him “Aunty Sharon.” We’d walk past his house on the way to school and my little Phoebe would yell out, “Wake up, Aunty Sharon!!!” All in good fun.

In the summer of 1985 Shawn and I backpacked around Europe. I could write 10,000 words about that trip so I’ll whittle it down to one story.

We had instituted a rule that if we were getting lazy and not meeting people (girls) we would do rock, paper, scissors and the loser had two minutes to meet a girl or girls. If that person failed, they had to buy dinner. We called it the Two Minute Rule.

So we’re in the Piazza San Marco in Venice when we invoked the rule…and I lost. So I breeze through the crowds and spot two Italian women sitting on some steps.

Shawn being the handsomer dude of the two of us ends up chatting with the more attractive girl who also had something else going for her…she spoke English! Unlike mine. So I struggled and got nowhere.

And Shawn? He and Elina got married two years later in her native Lake Como. I was the best man in their wedding.

A few years after that came their beautiful, bouncing baby, Bianca. Along with a searing sense of humor (at age 3 she used to refer to me as “Bruto” which means “ugly” in Italian), Bianca was blessed with serious intelligence. She graduated first in her class at Long Beach State University and is now getting her Phd in anthropology at Utrecht University in the Netherlands. Shawn and Elina hit a home run with Bianca.

Although Shawn and Elina divorced in 1995, he spent most of the 1990s and 2000s living in Italy because he wanted to be with and help raise Bianca. It wasn’t easy. He often felt lonely and out of place, but he pushed through it and did what was best for Bianca.

Fortune repaid him in 2008 when he met Claire, the woman he’d spend the rest of his days with.

Claire and Shawn, the perfect match

Most people find it hyperbolic when someone says two people are a perfect match. Well, Shawn and Claire were a perfect match. They simply loved each other’s company. In all the years they were together I never once heard Shawn say a bad word about Claire.

After teaching English together for many years in Italy and Vietnam, Shawn and Claire got married a few years ago in San Francisco. They’d lived the past two years in England just outside of Oxford.

We’d had one of our regular Zoom calls at the end of May and he was great. Nothing wrong. Fun conversation. No complaints. We emailed about one of my articles on June 25th.

I’m still in shock. Feeling equal parts sad and depressed about it.

Because he was such an amazing runner, that is what many will remember most about Shawn. And rightly so. He ran the 1500 meters in 3:46, which is just about equivalent to running a four minute mile. Put it this way, the winning time in the men’s 1500 at the Olympics in 2016 was 3:50.

But even though I was his biggest fan, I won’t remember Shawn for his running. Not at all.

I’ll remember him for the absolutely beautiful, tender, sweet heart he was blessed with. Try as he did to come off as a curmudgeon at times, he couldn’t pull it off. He was, at his core, simply a gentle, kind soul.

I don’t know where you are, Shawn. I know it’s somewhere out in that mystery of the universe.

I don’t know if that mystery permits you to read Medium articles, but in case it does, please know that the world is a lesser place without you in it and that those you left behind miss you and love you.