The Ecky 5: Five Eckhart Tolle Quotes That Provide Everything You Need For Your Spiritual Journey

David Gerken > Meditation > The Ecky 5: Five Eckhart Tolle Quotes That Provide Everything You Need For Your Spiritual Journey 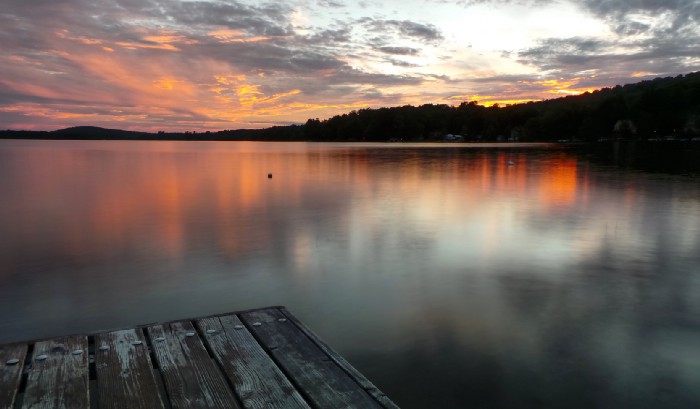 Eckhart Tolle is the only spiritual teacher I’ve encountered who seems to have achieved the highest spiritual state: He’s all consciousness, no ego. Incorporate these five nuggets of his into your life and you will be spiritually golden.

Notice that Eckhart isn’t directing you to ‘Be in the moment,’ or ‘Live in the moment.’ Why? Because most people have trouble saying to themselves, ‘Okay, let’s be present. Just be here, now.” This direct path to the present can feel jarring and usually doesn’t work very well, or at least not for long.

For most, the easier way to access the present moment is indirectly, by addressing the obstacles preventing you from being there at any given time. And that main obstacle is usually plain old resistance. We don’t even know that we’re doing it, but in MOST of the moments of our lives we’re resisting something happening in the present. You’re driving home, you’re on time and you’re stopped at a red light. What are you doing? Resisting that moment because you’re waiting at a light. “Turn green, damn it! I need to get to some better moments!” Or waiting in line at the store. There are thousands of examples of this. What they all have in common is what you are saying to yourself: “I can’t wait for this moment to be over so I can get to some better ones in the future.”

So what Eckhart’s quote provides is a back door entry into the present moment. He’s saying that whatever is going on in the present moment, just accept it as it is. I would add just one more word to emphasize this concept — EXACTLY. Accept this moment exactly as it is. Doesn’t mean you have to love every single moment. You just need to accept it. It’s there. Don’t fight with it. Don’t resist it. I’m telling you, if you start doing this, and by this I mean catching yourself resisting something that’s happening in the moment and then accepting it, you will feel the knots of anxiety and tension inside you just melt away.

2. “Instead of asking, ‘What do I want from life?’ a more powerful question is, ‘What does life want from me?’”

Don’t look at this one as being a reprise of John F. Kennedy’s clarion call to the nation in his 1961 inaugural address where he said, “Ask not what your country can do for you. Ask what you can do for your country.” Eckhart’s words here are not about serving the world instead of yourself. They’re much deeper than that. ‘What do I want from life?” is a superficial question that springs from the egoic “I” in all of us. “I want money.” “I want to be important and powerful.” And even, “I want to change the world.” People who approach the question this way can, and certainly have, accomplished what their egoic “I” set out to achieve. But that usually comes with a cost: a feeling of emptiness and lack of fulfillment all along the way.

“What does life want from me?” on the other hand, goes to a deeper part of yourself. In fact, you can replace the word ‘life’ in that question with ‘the universe,’ ‘God,’ ‘Providence,’ ‘nature,’ or whomever you think is running the cosmic show. Eckhart is asking us to go deep inside and listen to that mysterious voice within that communicates our destiny to us, if we would only listen. The people who do this, the people who “follow their bliss” as the great Joseph Campbell put it, live dynamic, energetic and fulfilling lives.

3. “You are never more yourself than when you are still.”

This one is huge and sets the table for the supreme spiritual question: Who am I? Most people believe that they are their thoughts. They believe that all the craziness going on in their minds is who they are. “If that woman flirts with my boyfriend one more time I’m going to rip her head off. Oh my god, I’m such a jealous nut case!” No, you’re not! Your mind and your thoughts are not who you are.

So who are you? Just as Eckhart states so eloquently, you are the stillness inside you. What the hell does that mean? It’s the you that exists when your mind is still and you’re not spewing out meaningless thoughts that race around your head like racecars around Daytona Speedway. It’s your conscious self. The real you. The brilliant you. The central thrust of most spiritual traditions is to get you to identify with that and not the crazy, mind-controlled you.

But my mind is crazy most of the time, you’re saying. So how do I get it to become ‘still’ and therefore access my real self? The best way is to develop a meditation practice. The aim of meditation is to focus your attention on something happening in the present moment, like your breathing. Then when your mind wanders, and it will, you just bring attention back to your breathing. Repeating this simple practice regularly will help slow your mind down and aid in your ability to be the conscious observer (who you are) of your thoughts (not who you are).

How do you get started with meditation? It’s not that big a deal. When I started meditating six years ago I created my own program. I made it simple, doable and designed it so that a regular person, like me, would be successful in developing a long-term practice. The program is eight-weeks and starts off with meditating for two minutes a day then building gradually from there. I strongly urge youto try it. And the good news is it’s free. You can access it at davidgerken.net.

4. “Surrender is the simple but profound wisdom of yielding to rather than opposing the flow of life.”

Here’s another massively important concept that Eckhart has winnowed down to one beautiful sentence. We all put so much effort into trying to control the events of our lives that we constantly resist what life has put in front of us rather than flow with it. It’s the control freak nature of humans (especially Americans!). The problem is that it’s futile, frustrating and a major energy killer. When you surrender to, and flow with, what life/God/the universe puts in front of you, good things tend to happen and you feel lighter, calmer and more in alignment with your nature.

What’s the best possible thing you could do to get a handle on this surrender thing? Take Michael Singer’s course Living From a Place of Surrender. It’s eight eloquent, moving hours of Singer exploring this subject and offering a simple technique for surrendering/letting go. I took it and it was a game-changer for me. You can find it at Soundstrue.com.

5. “Awareness is the greatest agent for change.”

I’ve seen several videos where Eckhart is asked a question from the audience about some difficulty they’re having with one of his teachings. Something like: “I get what you’re saying about being present, but I just can’t help it, my mind always wanders. What can I do?” And he answers the same way every time, “So you’re aware that your mind is wandering?” Audience member: “Yes.” Then he invariably says, “Great. You’ve already accomplished the most important thing. You’re aware of what you’re doing.” Bottom line, awareness really is the whole ball game on the spiritual path.

Why? Because awareness is what enables you to step back and become the conscious observer (which again is who you are) of your thoughts and mind activity, etc. For example: “I’ve been dwelling way too long on that snide comment my girlfriend threw at me this morning. Time to snap out of it and move on with my day.” And when you become aware of some wacky or troubling thought, you’re doing something absolutely essential to spiritual growth: you’re creating two entities, the subject (the aware observer, i.e. the real you) and the object (the wacky thought).

For most humans there is almost always only one entity — the crazy thoughts, and because of this you get lost in them and consumed by them. How could you not? That’s all there is. When you build up your awareness “muscle,” over time you’ll get better at not letting your out of control mind dictate your life. And that, my friends, is arguably the most important and healthy feat any human can achieve.

Once again, meditation is the best practice for strengthening your awareness muscle, for obvious reasons.

So there they are. The Ecky 5. Integrate them into your life and you will thrive on all levels.

And by the way, I call them the “Ecky 5,” because I’m trying to bring a little fun and lightheartedness to the spiritual space. Just because we’re into all this great stuff doesn’t mean we have to have our head in the clouds 24/7. Right? Anybody? Bueller?