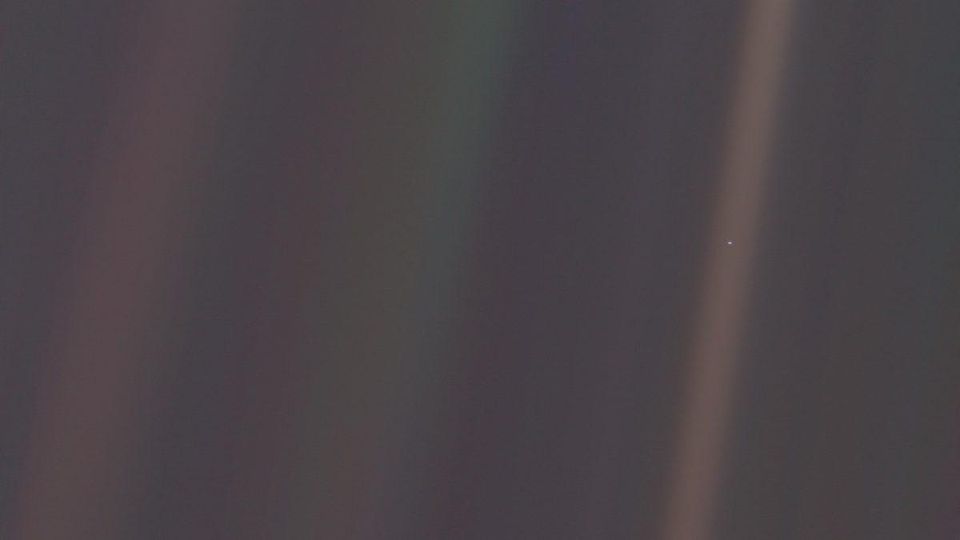 The photo above was taken from Voyager 1 at a distance of 3.7 billion miles, making it far and away the most distant image of Earth ever taken. Can you see little old earth? It’s the tiny dot about half way down and to the right, in the middle of the brown vertical band (the bands are the result of sunlight reflecting off the camera). Launched in 1977, Voyager 1’s chief objectives were to study Jupiter and Saturn. In 1990, ten years after completing this primary mission, the famed astronomer Carl Sagan convinced NASA to turn the probe’s cameras around and take one last photo of Earth from deep space.

The resultant photo provides a valuable reminder of how mind-blowingly infinitesimal our world is, a tiny dot in a vast ocean of blackness. As Sagan said about the dot in the photo: “That’s home. That’s us. On it, everyone you ever heard of, every human being who ever lived, lived out their lives. The aggregate of all our joys and sufferings, thousands of confident religions, ideologies and economic doctrines, every hunter and forager, every hero and coward, every creator and destroyer of civilizations, every king and peasant, every young couple in love, every hopeful child, every mother and father, every inventor and explorer, every teacher of morals, every corrupt politician, every superstar, every supreme leader, every saint and sinner in the history of our species, lived there on a mote of dust.”

Here’s a suggestion. Print out this photo and put it on your refrigerator. And save it to your phone. And the next time you find yourself ruminating about some pointless workplace scenario (“If that suck up Bill gets the promotion I’ll quit!” “She wears that same top to every weekly staff meeting; gee, I wonder why?” “If my numbers don’t go up next month I could get fired. Then what?”) take a look at that photo to remind yourself that we’re living on a tiny speck of sand twirling around in space in the middle of nowhere.

If you’re a young person feeling like the weight of the world is on your shoulders (“I have absolutely no idea what I want to do with my life.” “Should I keep teaching school or transition to finance so I can make some dough?” “Am I ever going to meet a good guy or will I be single and childless the rest of my life?”) look at that little dot to remind you how insignificant your problems are in the grand scheme of the universe.

If you’re a crazed mom who expends every bit of psychic energy just to keep your head above water (“If I leave the office now I can probably catch the second half of Sidney’s soccer game, but if my a-hole boss calls us all in to prep for tomorrow’s client pitch and I’m gone, I’m screwed. AHHH!!!” “I am so sick of these cliquey moms at school pick up; my god, it’s like high school all over again.” “We really need milk and cereal, but do I really want to drag my two toddlers kicking and screaming into the grocery store…?”) take note that of the 640,000 pixels in the Voyager photo, the Earth comprises only 1/8 of one pixel! All the rest is just empty space.

In fact, that’s 99.99999% of what the universe is — black space. Everywhere. Next time you catch yourself in another pointless, anxious spiral of thoughts, just stop. Look at the photo. And ask yourself: “Why am I taking this meaningless situation/problem so seriously?” Then close your eyes. And imagine yourself floating in that dark space. Quiet. Peaceful. No problems. Take three deep breaths as you float around. Then open your eyes and get on with your day, hopefully feeling lighter and less stressed.

The point here is not that because we live on a tiny “mote of dust” surrounded by blackness that life is meaningless. What I am saying is, first, that the Voyager 1 photo gives we earthlings perspective. We get so sucked in to our lives and take everything so seriously that we lose sight of the fact that living this way is absolutely absurd. We forget the great spiritual dictum: Be in the world, but not of it. In other words, don’t get so sucked in to all the pettiness and fear and desire in the external world that you lose your inner anchor.

Second, what this photo really evokes is awe. In all this mass of blackness exists a miniscule grain of sand where people love, drink, swim at the beach, eat, play tennis, set off fireworks on the Fourth of July, knit, read and do thousands of other things.

So Voyager 1, as you continue hurtling through interstellar space, now 13.5 billion miles away from home, I’d like to thank you for reminding me not to take for granted the cosmic gift that is life on Earth. And thanks also for slapping me in the face and waking me up to the fact that just about every problem I think I have doesn’t “amount to a hill of beans,” as Humphrey Bogart once so famously said.