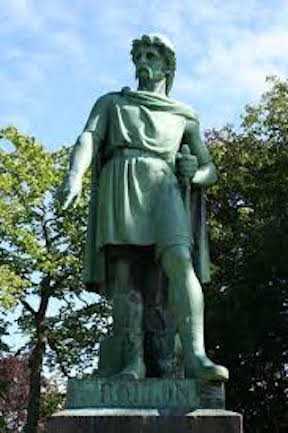 Granted, I majored in history, but I can say with utmost conviction that the following is objectively interesting. It’s the story of how two barbarians had a massive influence on the English language.

First, a guy named Alaric, leader of the barbarian Visigoths, is directly responsible for German having the largest influence on the English language. For example, to swim is schwimmen in German. Our beer is their bier. And so on.

Here’s how that happened. Starting with Julius Caesar in around 50 BC and culminating about 100 years later, the Romans conquered Britain.

Almost 400 years later, Rome was under attack from various barbarian tribes. The Visigoths, under Alaric, were the strongest and caused Roman leaders to recall all of their forces to defend Rome. Thus, Roman soldiers left Britain.

Word of the Roman evacuation spread to the Anglo and Saxon tribes in modern day Germany. Their response? They hightailed it across the North Sea, spending several years conquering most of Britain.

Over the next several hundred years the Germanic language (which we now call Old English) took hold in Britain. And by the way, ever wonder how England got its name? It derives from Angle land.

One-third of our English vocabulary derives from French. Beef=boeuf. Salad=salade. Toilet=toilette. And many hundreds of words are literally the same. Menu, chic, chauffeur, genre, souvenir and bouquet to name just a few. How did the French muscle in on the Anglo-Saxon Germanic influence on English?

It starts in the ninth century when the Vikings from Scandinavia started sailing south and pillaging modern day Germany and France. In France they would sail down to the Seine River, then head east and create havoc all the way to Paris.

Rollo was a particularly successful Viking pillager. So much so that the King of France, Charles the Simple, offered Rollo a deal. If he agreed to stop pillaging and actually defend France against other Viking invaders, he would grant Rollo the area known today as Normandy.

Why is it called Normandy? Because the French referred to the Vikings as the “Northmen.”