The Profound Spiritual Lesson Tennis Has Taught Me 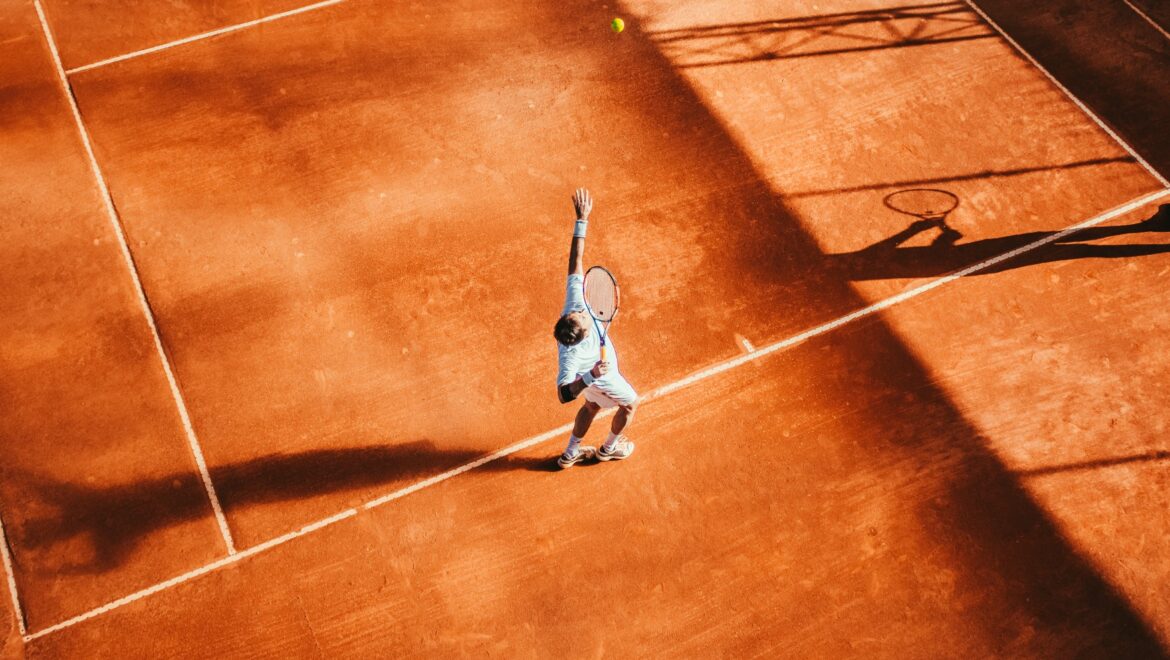 I’ve been playing tennis since the age of five. My parents got my five older siblings into it so, like so much of my childhood, tennis was yet another hand-me-down.

In those early years, I had to fight to get onto the court. We’d all head out to the courts at Cal Tech (in Pasadena, California) and I’d hit on a wall while my parents and siblings play.

I remember constantly begging my mom for a chance to hit, which she’d finally agreed to after an hour of me torturing her. (Karma has come full circle as my five-year-old daughter now tortures me to get on the court when we take our older two kids out to hit.)

As I got older, I played the junior tennis circuit in Southern California, which was incredibly competitive. I got good enough that the coach at Princeton University put me on his shortlist for the admissions office. Not that I was a C student or anything, but I had zero chance of getting into Princeton without that push from my coach. I wound up playing mostly number two to number five on the team for my four years there, which isn’t half bad.

And now? I play the old guy tournaments here in SoCal, which is a ton of fun, providing I don’t pull one of the 327 muscles in my body I never knew I had!

One short detour before we get to the heart of this piece. It’s my best tennis story. In the spring of 1985, I lucked into practicing with Rod Laver, considered by many to be the greatest tennis player of all time. He’s right up there with Federer, Nadal, and Djokovic in that conversation.

He was about 44 and I was 20 at the time. Bottom line: I played out of my mind, actually beating him in the practice tie-breakers we played.

Afterward, we were chatting and he asked me if I was playing in the French Open, which started in six weeks. I had absolutely no chance of making it into the French Open and told him as much. He then said,

“Do you want me to talk to Philippe and see if I can get you in?”

Finally, what tennis taught me

Okay, enough of me puffing up about my tennis game. The only reason any of you should care about this is that the massive lesson I learned playing this game is something you can translate into any endeavor you undertake.

What was that lesson?

I played my absolute best when my mind was calm and inactive.

Conversely, things went bad if I was constantly thinking, “Oh no, I’m losing. What if I lose?” or, if I was playing well against a really good player, “Holy shit! Maybe I can beat this guy!” Bottom line: I learned that thinking, of any kind, detracted from my performance.

This included getting mad if I screwed up. All that did was catapult me into the clutches of my egoic mind.

Tiger Woods, one shot at a time

To give but a salient example from the sports world, look at Tiger Woods. I remember countless times when some golf commentator would interview Tiger on the 18th green after one of his innumerable, magical finishes and gush, “Wow, Tiger! You were two shots behind with two holes to go and you went birdie, birdie. How did you do that? What were you thinking?”

Each time Tiger gave some variation of this answer: “Honestly, I wasn’t thinking about anything. I was just trying to stay in the moment and focus on each shot.”

Most important is what Tiger wasn’t doing — thinking about whether he was going to win or lose the tournament. Or thinking about how great, or terrible, his last shot was.

And do you know why Tiger focuses like a laser on the present moment? Because he’s the most competitive human being on this planet and he knows that staying present gives him the best chance of winning.

Why is this the case? Why does taking our mind out of the equation help so much? That’s easy: Because the genius in ALL of us can only arise when our minds shut the hell up.

It’s true for tennis…and everything else

I’m sure by now you see the analogy of my tennis to literally every other activity in life. That beautiful being in us is there all the time…if only we can get our minds to cooperate.

So I don’t care if you play golf, the piano, race cars, paint, sculpt or sell Ford trucks — you will perform at your best the more you stay present and don’t allow your mind to wander into the past or future.

I learned this invaluable lesson several decades before I started meditating and traveling the spiritual path and it has helped my growth immensely. Why? Because I have experienced, on a granular, deep level, the power and value of being present.

So when I started on this path, by reading thePower of Now by Eckhart Tolle and listening to any number of talks about conscious presence, I never doubted any of it for a second. Because I already knew from my tennis experience that everything these teachers were saying was spot on.

And when I started my meditation practice I knew, from day one, that this practice of getting quiet inside and watching my mind instead of getting sucked into it, was 100 percent valid and would lead me to good places. And it has.

So what does this mean for you? If you want to perform at your highest potential — as a golfer, pianist, salesperson, or, most importantly, a human being — focus your work on getting quiet inside.

How? Meditation is the most direct path to quieting the mind. But there’s yoga, chanting, doing mantras, taking long walks in nature…any number of activities that strengthen our ability to be present.

One last thing. Remember what I said about the great Tiger Woods? Well, his mother is from Thailand and had him meditating from a young age.

Time to get on it. If you’re looking for a place to start, try my simple, easy meditation program. You can find it at davidgerken.net.